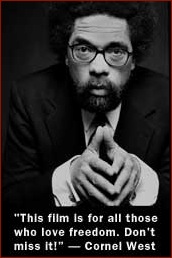 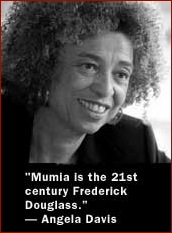 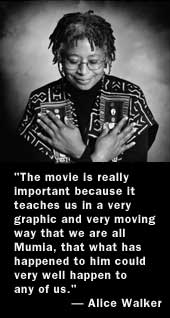 "Coverage of public discourse in the United States often makes it seem as if the only ideologies still in the game were the far right and the moderate everybody else. But “Mumia: Long Distance Revolutionary” is proof that there are still outspoken champions of views too radicalized to qualify as left-wing: people distrustful of law enforcement, the political system, the justice system, the news media and the very notion that America is at heart the land of the free. Getting a concentrated dose of activists like Angela Davis and Dick Gregory, academics like Cornel West and Michelle Alexander, and the many other talking heads in this film is certainly a bracing change from the usual back-and-forth of the evening news.”
— Neil Genzlinger, The New York Times

"Tracing the path of a brilliant journalist whose message cannot be silenced...Vittoria triumphantly heralds Abu-Jamal's return to the political scene as a rallying cry for an alternate political discourse." — Variety

“MUMIA: Long Distance Revolutionary” is a powerful indictment of the hypocrisy inherent in the American dream and is a must-see for any and all who are concerned with upholding the constitutional rights of all Americans." — Alex Simon, The Hollywood Interview / Huffington Post

“'Long Distance Revolutionary' is a blistering indictment of institutionalized racism and also a sensitive picture of a fascinating human being." - Jamie Rich, The Oregonian

“Vittoria rightly intuits that visually summarizing Abu-Jamal’s Wikipedia page could well be emotionally satisfying but would ultimately be less persuasive than simply allowing viewers to see the man and hear his words. 'Long Distance Revolutionary' won me over completely. - Kenneth Morefield, 1MoreFilmBlog

“’Mumia: Long Distance Revolutionary’ is one of the early part of this year’s crowning gems... And it’s as great a film as we’ve seen now a month into 2013." — Joshua Brunsting, Criterion Cast

"Doesn’t seek so much to clear the controversial figure’s name as to showcase his intellect and longstanding defiance of ‘The Establishment’." — Kam Williams, Philadelphia Sunday

"Passionate, partisan, and persuasive! A compelling documentary about a riveting historical figure, with a who’s who of storytellers woven by Vittoria into coherent narrative, with each one playing a brilliantly cast role: their own. It retells a history that is almost unbelievable if one did not experience it firsthand." — Eric Mann, War Resister's League

"Puts a human face on its subject, for so long now just an anti-capital-punishment icon… also makes the case, COINTELPRO and beyond, that power is hardly to be trusted in America." — Michael Atkinson, Time Out NY

"Uncompromising, disturbing…Abu-Jamal’s voice has the clarity and candor of a man whose impending death emboldens him to say what is on his mind without fear of consequence." — The Boston Globe

"Vittoria tells of an exceptional black Philly kid growing up in the days when police chief Frank Rizzo was attempting to beat the civil rights movement back with 1,000 nightsticks. (The film) sets Mumia the statue aglow." — The Village Voice

"Tells the story of a man who expresses deep compassion and public-mindedness, despite existing in Hellish conditions."
—
Yolande Brener, Harlem World

"Study of the civil rights era tends to end with the assassination of Dr. Martin Luther King, Jr. ‘Mumia’ is fascinating because it covers the overlooked time period -- the late sixties through the seventies -- by examining race relations within the northern city of Philadelphia, a place not popularly associated with racial injustice." — Alicia Fox, Student Handouts

"The film is part biography, part commentary... and part drama. ("Mumia") is a film that provokes and entertains." — Counterpunch

"One of America’s freest voices comes from a man behind bars and on death row for nearly three decades. Long Distance Revolutionary looks past his incarceration, instead focusing on Mumia as a journalist and the power of his voice." — Quinn Peterson, Jay-Z’s Life+Times

"Fascinating and persuasive. Vittoria creates a context that suggests how easily innocents could be railroaded. The result is not unlike Oliver Stone’s rewrite of U.S. history."— John Hartl, Seattle Times

"Mumia: Long Distance Revolutionary is a remarkable and necessary film... (the film) is an invaluable and moving portrayal... as Alice Walker puts it, the ability ‘to maintain one's humanity in the face of injustice.’”— Lee Wengraf, Socialist Worker

"Director Stephen Vittoria offers persuasive arguments that Abu-Jamal’s radical ideology (and his race) put him in the crosshairs of an overzealous police force with an axe to grind.”— Seattle City Arts

"A gripping documentary... comprehensive... edited in a very snappy, lively, way so it's very entertaining even though it's telling an intense story. And I love the way the film defines a revolutionary. as someone who has concern and love for the people, it's not someone who's waging war, it's about someone who's trying to stop injustice."— Rich Cline, Shadows on the Wall, UK

"“After 30 years in prison, Mumia Abu-Jamal still has the ability to provoke, educate and inspire, for those willing to listen. Attempts to silence Abu-Jamal—and the powers that be are nothing if not persistent—have failed. Through interviews and readings from his books (written in longhand, without benefit of online resources), his voice comes through clear as a bell in this inspiring portrait that throws a powerful punch for freedom of expression and democracy. Obscured in the long-standing controversy over his conviction for the shooting death of a Philadelphia police officer in 1981, and his adoption as a bumper-sticker symbol of injustice and racism, has been the fact that Abu-Jamal was and is a gifted journalist and brilliant writer. A potent chorus of prominent voices (comprised of Cornel West, Alice Walker, Dick Gregory, Angela Davis, Amy Goodman and others) lends fine support, but it’s the words and insights of the man himself that stick with you.”
—
Film Critic Michael Fox

Renowned journalist Chris Hedges sits with Mumia Abu-Jamal
and discusses the American Empire and Mass Incarceration
“I am sitting in the visiting area of the SCI Mahanoy prison in Frackville, Pa., on a rainy, cold Friday morning with Mumia Abu-Jamal, America’s most famous political prisoner and one of its few authentic revolutionaries. He is hunched forward on the gray plastic table, his dreadlocks cascading down the sides of his face, in a room that looks like a high school cafeteria.”
READ MORE

THE BALLSINESS OF THE LONG DISTANCE RUNNER: A CHAT WITH MUMIA ABU-JAMAL
Mumia Abu-Jamal has been one of journalism's most outspoken voices for nearly 40 years. However, Mumia's greatest fame has come not from his written work, but from the fact that he is one of the most famous state "employees" in the country: he has been in state prison since 1982, serving on death row until just over a year ago. READ MORE

MUMIA ABU-JAMAL AND FILMMAKER STEPHEN VITTORIA TALK AMERICAN IMPERIALISM
We recently spoke with Mumia and Vittoria about the film, the media, and what it means to fight for change in a modern world. READ MORE

Wesley Cook, aka Mumia Abu-Jamal, was born on April 24, 1954 in the City of Brotherly Love. There, he founded a branch of the Black Panthers at the age of 15 after being kicked by a cop at a rally for segregationist presidential candidate George Wallace. READ MORE


MUMIA ABU-JAMAL IS GUILTY OF BEING A ‘LONG DISTANCE REVOLUTIONARY’
A new documentary won’t resolve Abu-Jamal’s guilt or innocence in a 1981 murder, but it shows an activist whose commitment is never in doubt.
READ MORE


LONG DISTANCE REVOLUTIONARY: CATALYZING SOCIAL ACTIVISM
Thom Powers, DOC NYC’s Artistic Director, opened Saturday’s screening by calling LONG DISTANCE REVOLUTIONARY: A JOURNEY WITH MUMIA ABU-JAMAL “a different look at [Abu-Jamal’s] career, and a richer look.” He then handed the screening over to director Stephen Vittoria, who thanked DOC NYC for having “the courage and the commitment” to support his film. READ MORE